It looks like he’s finding things out the hard way.

For the second time in two games, Nottingham Forest got themselves into a lead, only to let it go and end up drawing the game as they were held 1-1 by Middlesbrough at the City Ground last night.

And speaking after the game, Forest boss Sabri Lamouchi was left cursing not going for a second goal and killing the game off when the opportunity presented itself:

“We need more character, especially at home, as the game was in our hands. We have won many games with less opportunities, so it is not about that. We need to find the solution, to keep going and be positive. I am upset, like the players, because tonight we lost two points. When we scored, we went back 20 yards and were, maybe, afraid to win. I don’t know, but we must play to win and score the second goal. If we don’t score the second goal, don’t give them anything.”

This is something that I have been talking about for some time now, and it looks as if the penny has finally dropped with Lamouchi, that winning games by a margin of one isn’t good enough in this division, you have to be able to turn slender victories into convincing ones if you are to have any chance of challenging at the top of the table. Look at Leeds United and West Brom, not only are they running away in terms of points, but goal difference as well.

I spoke before the game with Millwall that the winter period was going to be arguably one of the biggest tests that Lamouchi will face during his short time at the City Ground, and at the moment, he’s not really on course to pass that test.

He’s going to really have to have a rethink to come out of this busy stretch with as good a position in the league table as he enjoys right now, and given how soon the games come around, he’s not got a lot of time to think about it, so he’s going to have to be quick on his feet in order to figure something out.

Will Forest be in the Top 6 come the end of January? 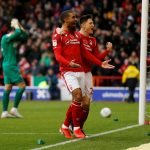 Or it could leave Forest playing catch-up when we get round to the second half of the season.