Claudio Yacob was part of a Nottingham Forest XI that beat Notts County 3-2 in a behind closed door friendly and some fans believe the 32-year-old is still good enough to feature under Sabri Lamouchi. Yacob hasn’t played a single minute of football this season, but he still has a lot of support on social media.

Have to be honest, not entirely he’s done much wrong here. For clarity, I wouldn’t put him ahead of Sow and Watson at the moment, but until he was axed by MON he was a real asset #nffc

Surprised he hasn’t had more game time under sabri I thought he would be just the type of player he likes! Shame because I’ve rated him every time he’s played!

Proper dropped off the radar, I like him as a player

Yacob would do a great job for majority of sides in this league. Shocked he’s not been used part of the squad.

The ball-winning midfielder joined Forest on a free transfer in September 2018 and has gone on to make 17 appearances in all competitions. Yacob’s last outing for the Reds came against Queens Park Rangers on April 27. He hasn’t made the matchday squad ever since and looks unlikely to play for the Reds again. 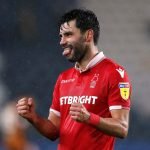 With Samba Sow, Alfa Semedo, Ben Watson, Ryan Yates and John Bostock for competition, Yacob is low down the pecking order. His contract expires next summer, but there’s a chance the midfielder could be offloaded in January. Forest tried to sell him to Olympiacos over the summer, but the deal fell through.

The East Midlands outfit may be putting Yacob in the shop window by featuring him in exhibition matches before the winter transfer window opens.