Report: Nottingham Forest midfielder ‘won’t be in the first team’ next season

According to Paul Taylor of Nottinghamshire Live, Liam Bridcutt ‘won’t be in the first-team’ next season for Nottingham Forest. The 30-year-old has been on the periphery over the last 12 months and might have to leave this summer to get regular playing time.

Taylor said in Friday’s webchat: “Bridcutt in particular must surely want to move on, just to get some game time. It has been 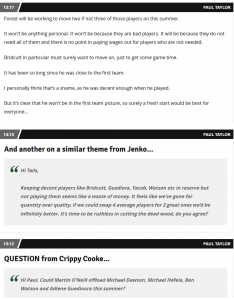 so long since he was close to the first team. I personally think that’s a shame, as he was decent enough when he played. But it’s clear that he won’t be in the first team picture, so surely a fresh start would be best for everyone…”

Bridcutt joined Forest from Leeds United in 2017 and has gone on to make 31 appearances in all competitions, the last of which came against Burton Albion in the EFL Cup on October 30, 2018. The Scotland international hasn’t made the matchday squad since then and looks destined for a departure as a result.

He was linked with a move to Ipswich Town in December, but the Tractor Boys might turn their attentions elsewhere after suffering relegation from the Championship last season. Bridcutt has one year left on his contract at Forest, but an early exit from the City Ground would suit all parties.

The midfielder finds himself behind Ryan Yates, Ben Watson, Adlene Guedioura and Claudio Yacob in the pecking order under Martin O’Neill despite impressing for the u23s. Bridcutt won’t want another season playing in the reserves, so it’s vital that he can find himself a new club for next season.