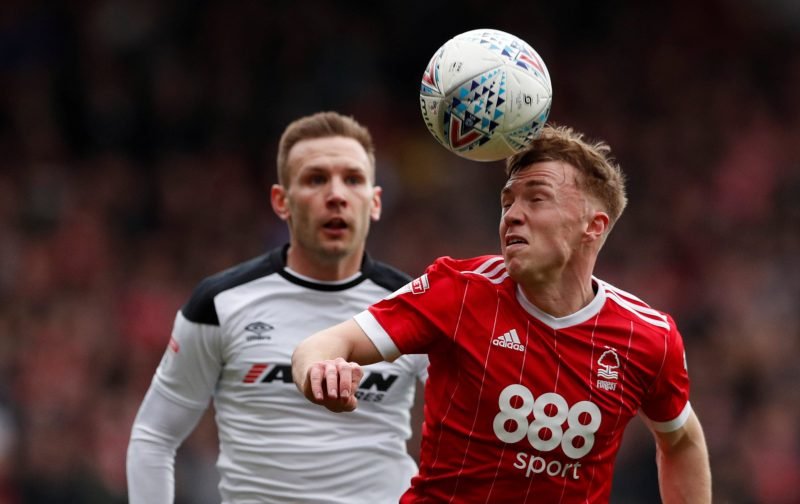 Nottingham Forest enjoyed a 2-1 win over Swansea City on Saturday afternoon, but it wasn’t a vintage performance from Martin O’Neill’s men. Ben Osborn was one who struggled to make a telling impact and drew a lot of criticism from supporters on social media.

FFS!!! We all know what usually happens when we play Osborn left back!!!!! #nffc

Osborn for Robinson baffles me!!! Like Osborn, but Robinson should be first choice left back. #nffc

Never thought I'd say it but #NFFC need to get Robinson on as soon as possible, Osborn atrocious so far

#NFFC O’Neil is taking us backwards fact,finally find a great left back and he plays Osborn there ????

Against tougher opposition to come in the run in Carvahlo has to feature more Colback and Watson didn’t work today I accept Grabban being subbed he’s not fully fit but Osborn is not a LB and when we got 1 sat on the bench? #nffc

#NFFC It’s all about opinions and I respect everyone has a right to one. Mine is this: Today was very poor. We got bloody lucky. The subs were puzzling. Robinson must start whenever possible. Osborn should not whenever possible. We’re still in the mix somehow.

This will upset a few… too many of our fans accept mediocre players, simply because they’re ‘one of our own’. Osborn and Cash aren’t good enough for a promotion chasing team. I’m not sure Yates should be in our starting 11 either (yet), but I like the lad #NFFC

Despite having Jack Robinson at his disposal, Osborn started at left-back. Against Swansea, the 24-year-old made 67 touches, 42 passes with 71% accuracy, two tackles, one interception, four clearances and whipping in five crosses with 20% accuracy.

Osborn failed to create a chance, making a successful dribble or win an aerial duel. He also made three unsupported touches and was dispossessed once. The Englishman hasn’t done too badly at left-back in previous games, but he wasn’t at his best on Saturday.

Osborn has been a regular this season, making 34 Championship appearances, scoring and creating six goals. He’s made 46 chances, boasts a 52% dribble success rate and has averaged a tackle (63) or interception (28) every 26 minutes. He’s also whipped in 100 crosses with 32% accuracy.

Robinson could return for Forest’s next game against Rotherham United (away) on April 6. The Reds are ninth in the Championship with 57 points from 39 games, two points adrift of the playoffs.